The name gold comes from an Old English word meaning yellow. In Xhosa and Zulu, the precious metal is known as igolide.

Gold is a metallic element with the atomic number 79 and the chemical symbol Au. Au comes from the Latin aurum, which means 'shining dawn'.

On the periodic table of elements, gold is referred to as a 'transition metal' and is also one of the so-called precious metals. Transition metals are special in that they are usually shiny, are conductive and malleable, and have a tendency to form compounds. 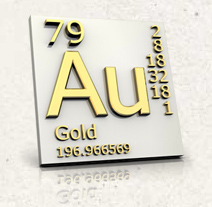 Even though we use the metric system, the weight of gold is often reported in troy ounces (1 troy ounce = 31.1034768 grams). When consumers buy gold they do so according to its 'purity', which is measured in karats. It is believed that this measure comes from the word carob, because the seeds of the carob tree were apparently used to balance scales in ancient gold markets.