Gold mining has released contaminants into the environment of the West and Central Rand for more than a century, creating a challenging legacy issue for South Africa, the government and the industry today.

Acid mine drainage (AMD) forms when water and oxygen combine with sulfide minerals to produce highly acidic water. This water contains elevated concentrations of heavy metals, which are in some cases radioactive. AMD comes from two main sources:

Community members may indirectly ingest AMD, by eating vegetables irrigated with the polluted water, meat from cattle that have drunk from local waterways, and fish from contaminated bodies of water. Heavy metals and radiation can contribute to immediate and long-term medical problems ranging from asthma and skin rashes to damage to the kidneys and the nervous system and an increased risk of cancer.

AMD from flooded mines as well as runoff and seepage from waste dumps has contaminated lakes and rivers in parts of the Witwatersrand. The polluted water decanted - reached the surface - for several years in the West Rand, beginning in 2002, and it has threatened to do the same in the Central Rand.

Much research has been undertaken in recent years to understand how this enormous water resource can be turned to account in a country where water is such a scarce resource. Two new government-led treatment plants have largely stemmed the flow of decant, although technical limitations have prevented the existing facilities from treating the water sufficiently for discharge into the natural environment. In 2016, the government initiated a project to improve the treatment process, and this is expected to be operational by 2020. There is no doubt that more needs to be done and industry and community involvement are essential to address the situation. 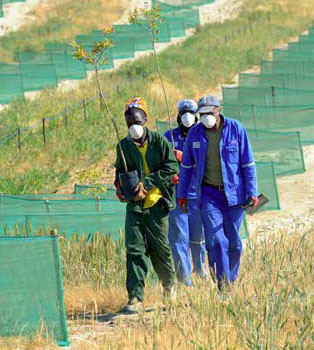 The gold mining industry has resulted in more than 200 waste dumps - or tailings dams - in the Johannesburg area, being deposited over more than 100 years of mining. In some cases, these 'dams' contain elevated concentrations of heavy metals.

Dust from mine dumps can become a nuisance to communities, particularly during dry, windy weather. Some communities have complained of asthma and other breathing difficulties. This remains a challenge, particularly as communities have typically been developed around 'dams', without observing regulations that prohibit construction within 500m of 'dams'.

Dust control measures are used, such as irrigation and vegetation of the dams and dust fall-out is measured and monitored. Particularly problematic are the 'dams' that were deposited many decades ago, before modern deposition and rehabilitation methods were put in place, and whose owners have long since disappeared. Fortunately, a number of mining companies are re-processing dumps, with many iconic dumps having disappeared from the Johannesburg skyline in recent years. Once the heavy metals have been extracted from these dams, the remaining material is redeposited in modern, mega dumps.