Throughout history gold has been highly sought-after, revered and cherished. More than that, it is used for a myriad of applications and remains one of the most sought-after precious metals found on the planet.

Gold is highly prized not only for its natural beauty but for its rarity, usefulness and versatility, and can be found in almost every sphere of modern life. Gold's many, and diverse, properties - some of which are unique to gold - make it an indispensable and vital component in various fields. Traditionally gold has been used to make coins, bullion and jewellery, but in recent times it has been used in a variety of less typical ways. 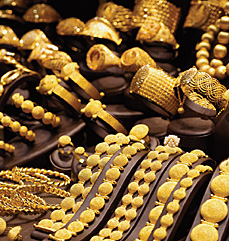 The use of gold in making jewellery dates back to around 6,000 years ago. Egyptian pharaoh Tutankhamun's famous burial mask was made from gold. Approximately 78% of the total gold mined each year is made into jewellery as it is very easy to work, can be drawn into wires, hammered into thin sheets, melted and cast into shapes, is tarnish resistant, has a very high lustre and a desirable yellow colour.

Jewellery is still the most common way gold reaches consumers.

Throughout history, gold has been seen as a symbol of wealth and used for financial transactions. The first purely gold coins are believed to have been manufactured in the Asia Minor kingdom of Lydia in 560 BC. This tradition continues today and gold is still the most popular precious metal for investments.

One of the most common ways to hold or invest in gold is in gold coins, gold bars, or gold bullion. South Africa's Krugerrand is the world's most widely-held and actively-traded gold bullion coin, developed by the country's Minerals Council. The first 22 karat gold Krugerrand was minted on 3 July 1967.

Gold has been used in dentistry since 700 BC. It is chemically inert, easy to insert and non-allergenic in nature and therefore highly suitable for fillings, crowns, bridges and orthodontic appliances. The gold used in dentistry is predominantly white gold, usually 15 karat or higher, or a gold alloy.

Gold is also used in medicine in salt or radioisotope forms which are taken orally or via injection to alleviate certain conditions including severe rheumatoid arthritis and tuberculosis. Small amounts of gold isotopes are used in the diagnosis and treatment of certain illnesses. In lagophthalmos, a condition characterised by a person's inability to close their eyes, a small amount of gold is planted in the upper eyelid to help the person close their eyes. The gold isotope, gold-198, is used in the treatment of cancer. 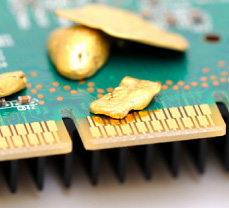 Gold plays a vital role in the aerospace industry where consistent and effective technologies are key to survival. Gold is used to lubricate various mechanical parts, in circuitry to conduct electricity and to coat the insides of spacecraft to protect people inside from infrared radiation and heat.

Gold is a dependable, highly-efficient conductor and connector, and it does not corrode making it perfect for use in circuitry.

The unparalleled beautify and qualities of gold make it one of the highest status symbols. We use gold for our most noteworthy objects: wedding rings, Olympic medals, religious icons and Oscars.

Gold is even used in making energy-efficient glass for multi-storey buildings.