For many years until 2006, South Africa was the world's dominant gold producer. More recently, other countries have surpassed South Africa, although none has approached the country's peak production which occurred in the 1970s.

This was the boom period for South African gold mining with production peaking in 1970 at more than 1,000 tonnes and the gold price reaching $850/oz in 1980. 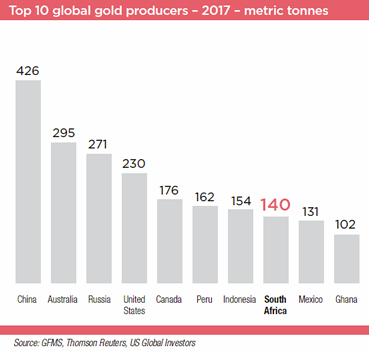 The following major South African gold mining companies each own a number of mines:

These companies are all listed, which means their shares are traded on an official stock exchange. A listed company must adhere to the listing requirements of that exchange. Many pension funds such as the Government Employees Pension Fund and private pension funds own shares in these companies, so indirectly many South Africans are part-owners.